ISO DIS 37301 Compliance management systems – Requirements with guidance for use

ISO DIS 37000 Guidance for the governance of organizations

One of the great successes of our time is the unprecedented global scientific cooperation and the joint efforts of governments, not-for-profits and corporations to develop safe and effective COVID-19 vaccines quickly. Today, 17 vaccines have received approval for use by at least one national regulatory authority, and seven vaccines have WHO's Emergency Use listing. No doubt, without this integrated and cooperative approach, the breakneck pace at which the lifesaving vaccines in use were developed could not have happened.

However, just as the vaccines were becoming available in January 2021, the Director-General of the World Health Organization, Tedros Adhanom Ghebreyesus, warned that the world was on "the brink of a catastrophic moral failure unless urgent steps were taken to ensure equitable distribution of vaccines".

Four months later, in May, while UNICEF declared "equitable vaccine distribution is a humanitarian imperative", the Prime Minister of Trinidad and Tobago had cause to explain to the country's population why vaccine availability was so limited. He reported that only 0.03% of the vaccines available globally had found their way to low income and developing countries. At the same time, the UN Secretary-General António Guterres confirmed that more than 82% of the world's vaccine doses had gone to affluent countries and restated an earlier assertion that "no one will be safe until everyone is safe" — a stark reminder of just how interconnected our wellbeing is.  Today, almost two months later, we are far from the breakthrough needed, having shipped only 90 million doses through the COVAX facility to 133 countries and 42 million doses donated.

With reported vaccine prices varying between US$2 -US$40 per dose, and supply problems expected to persist over the coming three months, it will be vital for countries that have accumulated excess doses to donate to lower-income countries. In the last quarter of 2021, it is anticipated that supply problems will give way to the challenges of enabling countries to receive and distribute the 400 million doses that will become available every month.

The COVID-19 epidemic, our initial failure to muster a globally coordinated response to ward off the worse effects of the pandemic, then the fast vaccine progress through scientific collaboration and organizational partnerships, and now, the slow implementation of a system to extend equitable access to vaccines beyond the high-income countries, have revealed both potentials and pitfalls. The crisis resulting from the pandemic is far from over, and it is critical that we build on the best and avoid the worst of the experience thus far.

One thing the experience has demonstrated is that we will succeed only when there is open sharing of information and intense collaboration in all forms - private sector (e.g. BioNTech and Pfizer), academia and private sector (Oxford University and AstraZeneca), civil society organizations and multi-laterals, governments, inter-governmental, private sector (e.g. the COVAX facility, which is an incredibly broad partnership developed under the leadership of Gavi, a public-private alliance, and its core partners the WHO, UNICEF, the World Bank, and the Bill & Melinda Gates Foundation).

The experience has also shown that such collaborations require a lot of work and good governance to to agree on solutions and that even then, cooperation is not always very stable. Take, for instance the case of the COVAX facility: it was developed on an all-for-one-and-one-for-all approach for defeating the pandemic and relied on all countries, including the higher-income countries, purchasing significant amounts of vaccines through the facility. In unity, there is strength.

Even though the COVAX facility is the result of unprecedented collaboration, there is still much further to go. The generally agreed target was that COVAX would provide sufficient vaccines for 20% of the population in lower-income countries. That is far from the widely used estimate of at least 70% population immunization requirement to achieve herd immunity. But even the 20% were put at risk. Three dozen countries bypassed the facility and made huge bilateral deals with the manufacturers – thereby literally clearing the shelves. By August 2020, the USA had entered into seven bilateral deals with six companies for 800 million doses, enough to vaccinate 140% of its population. Not much later, the EU followed with two deals for 500 million doses, and the UK had entered into five deals, securing 270 million doses, enough for 270% of the UK population.

These events demonstrate, in technicolour, the urgent necessity of demanding that everyone, including and especially national governments and private-sector corporations, play an even more prominent role in driving globally based longer-term wellbeing solutions than convenient short term gains.

Fighting a pandemic can only be overcome by collective, integrated efforts. Isn't it time for rich and poor, private and public, to innovate further and find robust ways of working together to better all?  Because until we find more ways to bring equitable support to deal with pandemics and other global threats, we fight a losing battle. The solution is to ensure that all organizations, including corporations, put their true purpose at their core.  Purpose-driven organizations act differently since they focus on the ultimate wellbeing, the health and welfare of the planet and its people.  Yet, they remain astoundingly profitable.

It will not be a long time before we learn many more details of what went on behind closed doors when the bilateral and COVAX deals were struck. What we can say at this stage already is that the major pharmaceutical companies involved have defined their purpose in different ways and have varied polices with respect to profit and COVID-19 vaccines. Johnson & Johnson, as well as AstraZeneca, have committed, for example, to provide their vaccines on a not-for-profit basis until the pandemic comes to an end. AstraZeneca, which defines its purpose" to push the boundaries of science to deliver life-changing medicines," goes even further and will make the vaccine available to low-income countries at no profit in perpetuity. Another example is Moderna, which decided already in October 2020 that it will not enforce its COVID-19 related patents against those making vaccines intended to combat the pandemic.

At the same time, we can also say that thus far, contrary to the public commitments and declarations of governments and companies, the process of distributing vaccines has resulted in outrageous inequity. It will be very interesting when the details of the contracts that these corporations signed in bilateral contracts with governments, especially the export restrictions (not only of readymade vaccines but the vital materials for the production of vaccines) that were put in the USA, Europe, and beyond, emerge. This is not only a case of political vaccine nationalism but also one of bad corporate governance. Strive Masiyiwa, African Union Special Envoy to the African Vaccine Acquisition Task Team (AVATT), highlights this based on the meetings he had with all vaccine manufacturers in December 2020 in which they told him that all the production capacity for 2021 had been already sold to the few who used their economic power to muscle their way to the front of the line while others, who also wanted to buy, were persuaded and kept out of a bilateral zero-sum race. Their alternative was to be the joined-up route through the COVAX facility. Many of the pharmaceutical company websites speak of their commitment to equity and health for all. But, asks Mr Masiyiwa ‘How can a board of directors think such decisions are moral? To knowingly sell, or buy, the entire production capacity and leave ‘500,000 for a continent of 1.3 billion people’?

Purposeful organizations lean into purpose by sustainably creating and furthering wellbeing. That is their primary purpose and they live that in a way that is consistent with their stated beliefs and values. The model developed by the Organization for Economic Co-operation and Development (OECD), for example, features eleven dimensions of our lives through which we can measure current wellbeing and an additional four to secure future wellbeing (see Figure 1). 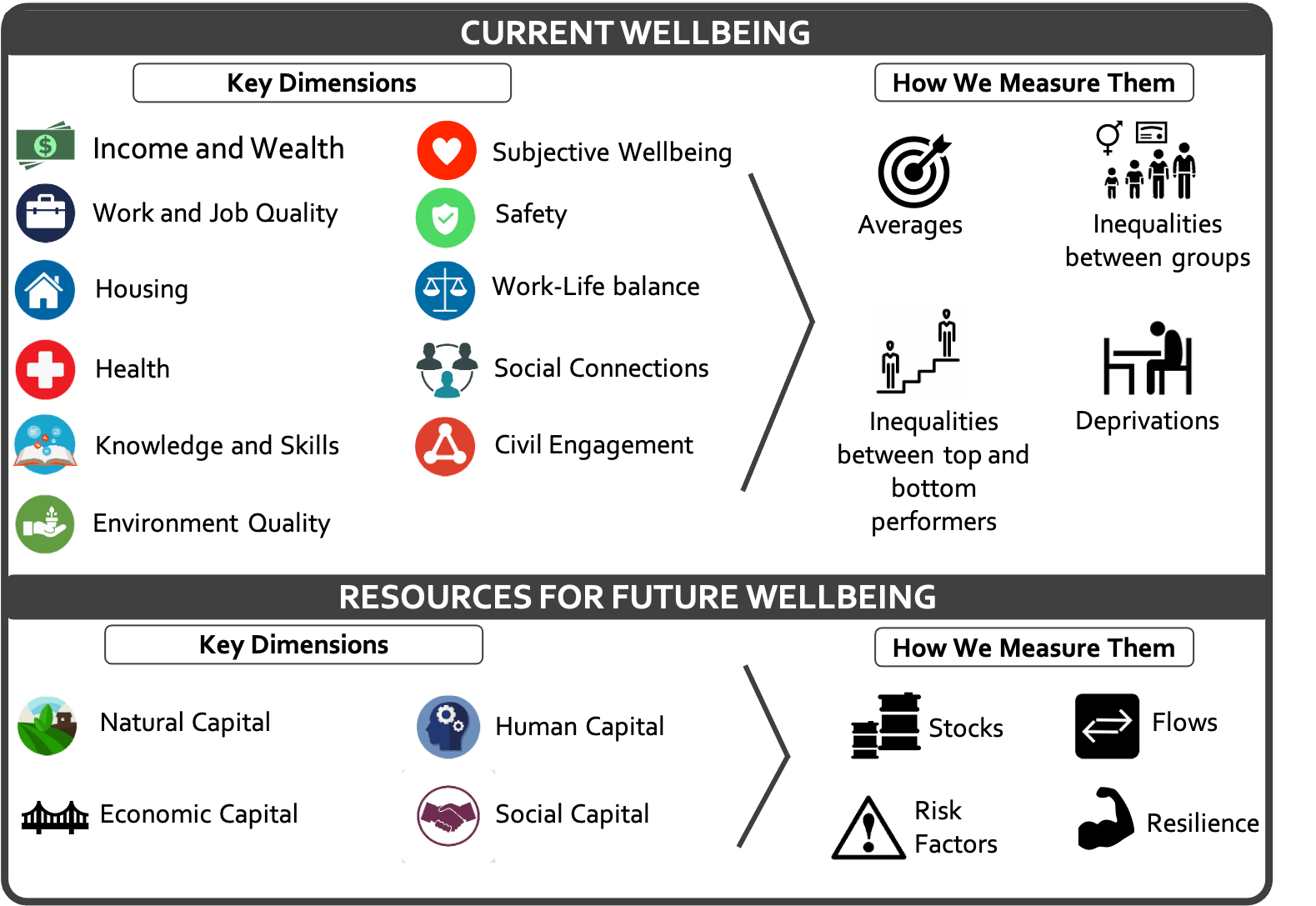 Simply put, purposeful organizations, at their core, always keep their focus on making one or more of these wellbeing aspects of our lives "better" by working to find ways that also generate returns, surpluses, and profit. Governments must also be purposeful by working to make the lives of citizens better in fundamental and longer-term ways, and not give in to short term populism that may win the next election but at great longer-term costs, which may undermine not only the natural capital base but of trust and other social capital.

In considering the current crisis over the inequitable distribution of COVID-19 vaccines, the purpose-driven approach will find more innovative, integrated, and equitable solutions for vaccination instead of organizations that do not exercise ethical leadership themselves, and having companies and governments that focus on those who can pay or serve only their direct and immediate constituents.

Current approaches to building an organization's identity have given more guidance on the role of mission, vision, and values. These concepts, however, do not in and of themselves always create a clear path to identify, define or fulfil a purpose that includes the health and wellbeing of the planet and its people. Organizations need a systematic way to determine and articulate their purpose in a manner that includes but goes beyond the intermediary goals of the profit, surplus, and growth generated from selling goods or services. The focus and the starting point is and needs to be the 'why' behind the production and selling of good and services.

The "Purpose Wheel", developed by Axel Kravatzky and Mark Stephens, provides a clear and concise way of rediscovering purpose that is systematic and coherent. By reexamining the known levers of mission and vision in a multidimensional and interconnected way, and building on the work of Peter Drucker, Richard Barrett, Victoria Hurth, Colin Mayer, B-Lab, ISO 37000 and many others, the Purpose Wheel takes corporate leaders through a concise step by step process, to arrive at their true organizational purpose. The Purpose Wheel is different from previous approaches because it enables a deep exploration of "why" a corporation does what it does, how that connects to an element of long-term wellbeing (purpose) and how purpose, in turn, relates to mission, vision, and values. 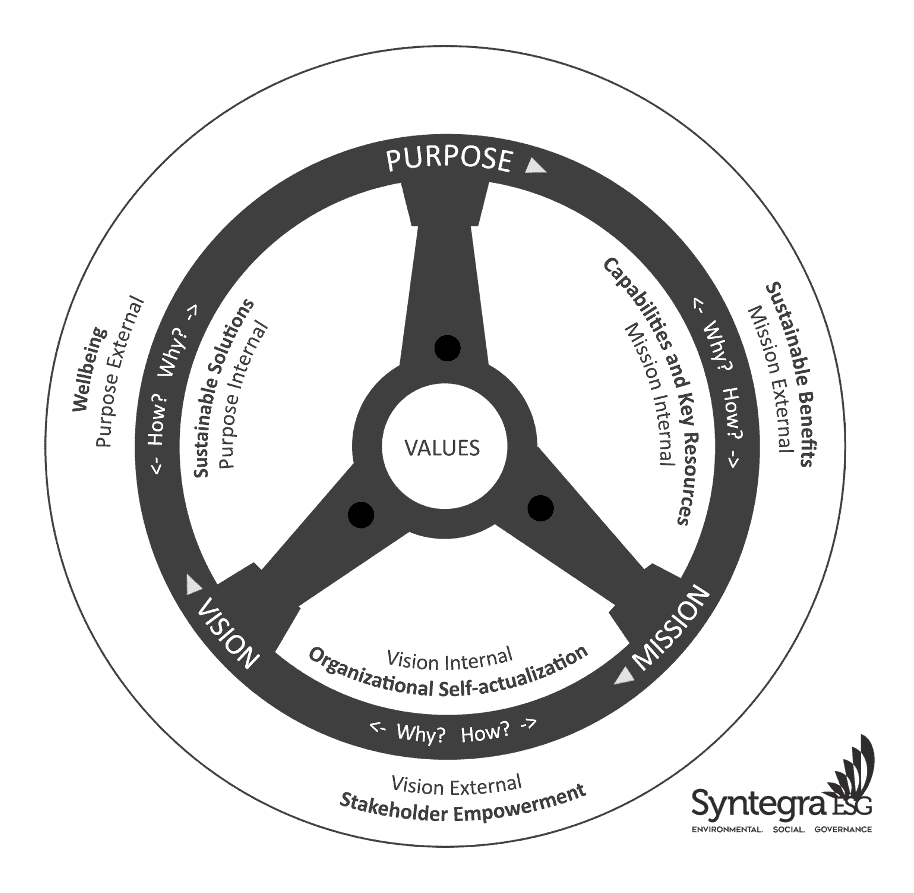 The future that we sense emerging is filled with both hope and possibilities. It urgently requires all organizations, including our corporations, to reimagine who they are, restate their role, redefine their ultimate intended impact on those they serve, those who serve them, other relevant stakeholders, and the natural environment.

Being purpose-driven is where, going forward, corporations will hold potential for optimal functionality for sustainable profit and societal benefits to make the world become a better place for all. We need to learn all we can from reflections in our experiences in COVID-19 pandemic because this matter of collaboration and cooperation for common purpose should help with solutions to climate change and biodiversity crises which will be a lot more challenging.